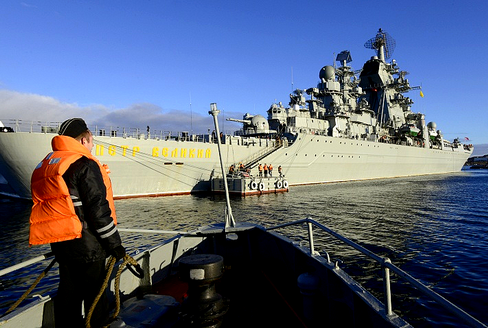 Russia’s 3M22 Zircon hypersonic cruise missile is expected to enter into production in 2018. The new weapon – which is capable of speeds of around Mach 5.0-Mach 6.0—is currently in testing. “State tests of Zircon are scheduled for completion in 2017 in accordance with the contract, and the missile’s serial production is planned to be launched next year,” a Russian defense industry The hypersonic missile which is a component of the 3K22 Zircon system – will be incorporated into the nuclear-powered Project 11442 Orlan-class battlecruiser (NATO : Kirov-class) Pyotr Veliky when it completes its overhaul in late 2022. Sister ship Admiral Nakhimov-which is currently being modernized – will likely be the first Russian warship equipped with the new missile when it returns to service in 2018.

“The Admiral Nakhimov heavy missile cruiser’s deep modernization envisages the replacement of the warship’s missile strike system. As a result, the vessel will get the Zircon hypersonic missiles,” a source told TASS. The new missiles would replace the two battlecruisers’ 390-mile range P-700Granit supersonic anti-ship missile armament. While the Zircon range will likely be shorter-about 250 miles—its sheer speed will make it extremely difficult to intercept with current missile defense technology. Moscow plans to refit the two giant warships with ten 3S-14 vertical launch systems each of which carries eight rounds. The addition of the 3S-14 would enable each ship to carry eighty cruise missiles onboard. The ships would carry a mix of Zircon and long-range Kalibr cruise missiles. However, according to TASS, the Zircon will also be built in air and submarine-launched versions. It has been previously reported the Zircon will also be used onboard Russia’s next-generation Husky-class nuclear attack submarines. But there is no reason those same weapons couldn’t be used onboard Russia’s existing fleet of conventional and nuclear submarines like the Project 855M Yasen-class or older Project 971 Shchuka-B-class submarines.

Moreover, the Russians are expected to use hypersonic missiles onboard the both the new production Tupolev Tu-160M2 Blackjack and the developmental Tupolev PAK-DA stealth bomber. The combination of a long-range bomber and hypersonic cruise missiles would be a dangerous threat to the U.S. and its allies.